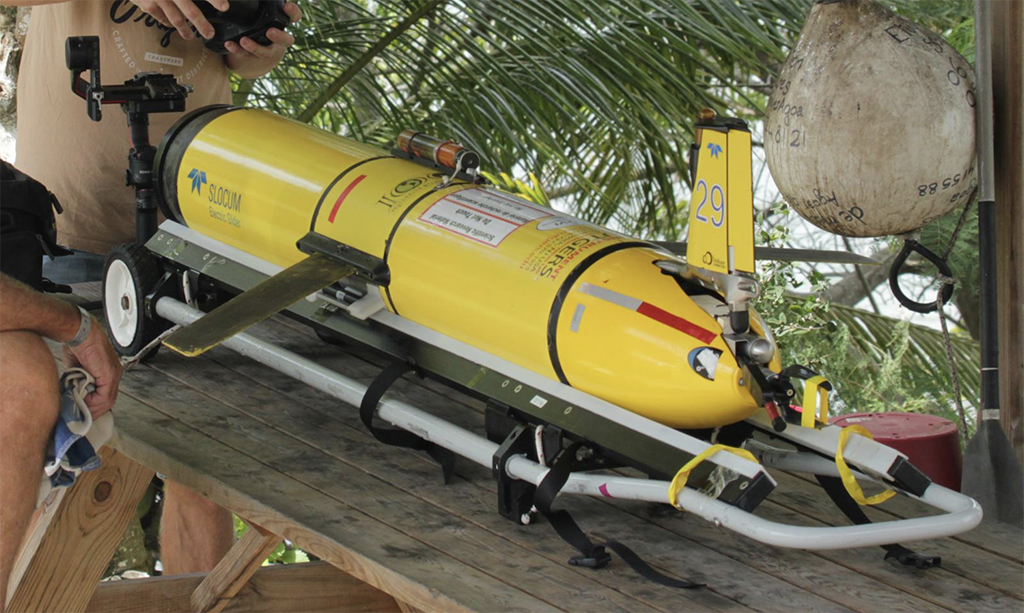 On Monday, October 3, three American scientists have been welcomed to the premises of the AGOA Sanctuary as part of an opportunistic collaboration. Our scientists are taking advantage of the deployment of an American glider in the waters of the French West Indies to attach a hydrophone to it and test a data collection method.

Travis Miles, Joe Gradone, and Doug Wilson, American researchers from the University of the United States Virgin Islands and Rutgers University in New Jersey, work on ocean water parameters. They are carrying out a mission in the southern Caribbean arc with the aim of studying the heat transfers of the currents coming from Brazil and entering the Caribbean. This mission also allows them to improve meteorological models for predicting cyclones, which require precise water temperature to gain momentum. To carry out this mission they use an underwater glider.

The glider is an autonomous device controlled by satellite which will take measurements in the water column on its way. It performs programmed dives up to 1000 m depth during which its sensors (oxygen, temperature, salinity) will record the characteristics of the water masses according to the depth. Each time it comes to the surface, the glider sends the results of its dive ashore via satellites.

Around the world, gliders are also used to study the chemistry of the oceans or the animals that inhabit them. Equipping them with hydrophones makes it possible to hear the animals that are on the mission’s path: whale songs, sperm whale clicks or dolphin whistles. The interest is then to obtain recordings of areas that are not easily accessible by boats, offshore, in the depths, while avoiding the sea conditions of the hurricane season. Thus, this type of mission can help improve knowledge on the distribution of cetaceans on the scale of the Caribbean.

The American team therefore agreed to attach a hydrophone to the back of the glider at the request of the AGOA Sanctuary team. This deployment is a first for the Caribbean, and will allow us to test the potential of this method in our waters.

The “RU29” glider was deployed this Wednesday, October 5 on the Caribbean coast of Martinique. Transported to sea thanks to the nautical means made available by the Marine Natural Park of Martinique, the machine mounted on a launching ramp was slid into the ocean. It will descend through the interior of the Caribbean arc until it reaches the waters of Granada, then return to Martinique in about 1 month. It will then be revived to go this time towards the north of the arc. While the information from the physical sensors is sent by satellite in near real time, it will be necessary to wait for the return of the glider to extract the acoustic recordings and analyze them in search of cetaceans.

The presence of American scientists for a week allowed many discussions on scientific cooperation in the Caribbean, and the usefulness of gliders for different studies, marine mammals of course, but also water quality, currents, etc. . We hope that these fruitful contacts will continue in the future.

Original article in French at AGOA